There are various types of auditory devices that have greatly improved hearing for many individuals in society. These devices include hearing aids, middle ear implants and cochlear implants. However, there are still several key limitations with these devices that have hindered their ability to provide more natural hearing, especially in noisy environments or for complex inputs. For example, hearing aids can experience acoustic feedback issues and may not have enough power/amplification to transmit sufficient sounds to the cochlea if the middle or inner ear is severely damaged or ossified. For cochlear implants, there is a poor electrode-to-neural interface in which the electrodes are immersed within the cochlear fluids and are distant from the target auditory nerves on the other side of the bony modiolar wall; thus, electrical current is broadly spread across the cochlea, limiting the effective number of transmission channels of information to the auditory brain. For the past decade, the SONIC Lab has been investigating new forms of energy to activate the peripheral auditory system to improve hearing performance over current technologies. Two novel forms of energy are ultrasound stimulation and laser stimulation, both of which can be used to vibrate the peripheral hearing organ and activate the ascending auditory pathways to elicit hearing sensations. These forms of energy can be used for hearing aids or middle ear implants, further described below. For implantable neural prostheses, an alternative to cochlear implants for achieving a greater number of transmission channels to the brain are electrode devices that can be directly implanted into the auditory nerve or brain for hearing restoration (see Central Auditory Prostheses research in the lab). 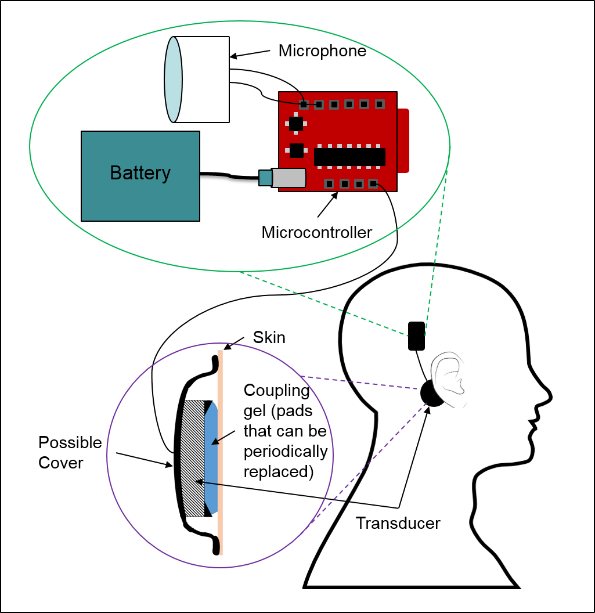 We are investigating the ability of ultrasound energy to noninvasively activate the auditory system. Recently, in animal experiments, the SONIC Lab discovered that ultrasound stimulation of the head or body can noninvasively activate the auditory system (see recent work by Guo et al.). Ultrasound waves can pass through the skull and cause vibration of the cerebrospinal fluid (CSF). Vibrations can then propagate through the cochlear aqueduct into the cochlea causing vibrations of the fluid within the cochlea, leading to activation of the ascending auditory system. The SONIC Lab is currently investigating different stimulation parameters and algorithms to achieve auditory activation with ultrasound that can mimic the patterns elicited to natural sound stimulation, including with pure tones and speech stimuli. We are also investigating the safety profile of a wide range of ultrasound parameters and technologies that can eventually be used in human subjects towards developing a new type of hearing aid. This hearing device could be positioned on different head and neck locations without requiring occlusion of the ear canal. Furthermore, ultrasound stimulation would avoid acoustic feedback issues since its spectrum could be designed to be outside the range being sensed by the microphone.

About a decade ago, Drs. Hubert Lim and Gentiana Wenzel, while both at Hannover Medical School under the mentorship of Dr. Thomas Lenarz, discovered that green laser light stimulation could cause acoustic effects in the peripheral auditory system. In particular, short laser pulses can cause an optoacoustic effect in which the light energy is converted into vibrations within the targeted medium, which includes the eardrum, middle ear bones and cochlear membrane (see publications on laser stimulation experiments). More recently, Drs. Lim and Wenzel have been working together to develop different stimulation algorithms that can vibrate the ear drum or middle ear bones to elicit frequency-specific activation within the auditory brain, without requiring direct contact with those structures. These findings have potential applications for a novel non-contact hearing aid or middle ear implant technology that would also avoid the acoustic feedback issues mentioned above. Further collaborative research is being pursued in Dr. Wenzel’s lab led by graduate student, Patricia Stahn, through in vivo and in vitro experiments as well as modeling simulations.